The Legends of Tatev Monastery 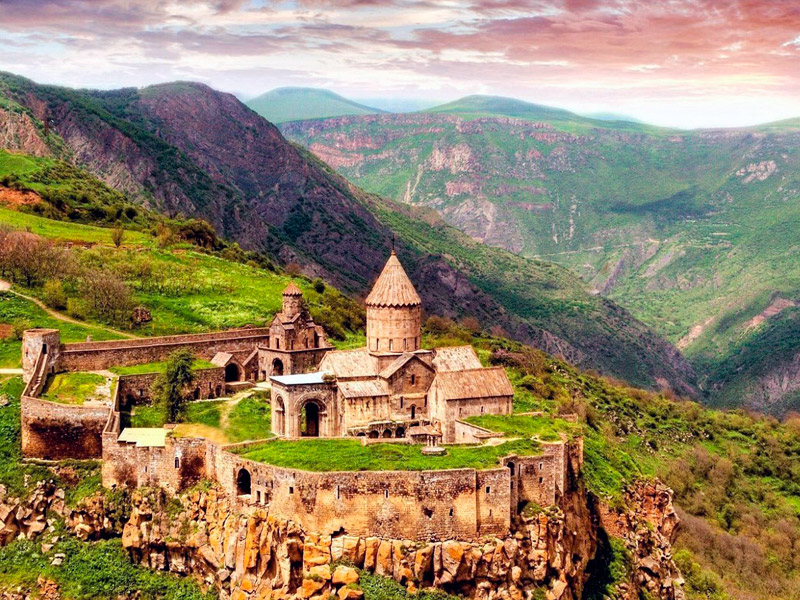 Tatev Monastery is located in Syunik region on a high cliff overlooking the deep gorge of the Vorotan River. It was built during the 9th-10th centuries and is considered the pearl of Armenian medieval architecture. Once it was the main spiritual and cultural center of Armenia. This monastery is associated with many interesting legends, some of which we will tell you today:

It is said that the master who built the monastery, at the end of his work, asked to bring him two wood chips. Taking them he prayed to God and said: “ogni Surb ta tev”, which is translated from Armenian as: “May the Holy Spirit send down the wings.” After these words, he jumped into the abyss. In flight, the wings grew behind his back and he flew away, the monastery was named in honor of this miracle – Tatev, that means “give wings.”

There is another legend connected with the etymology of Tatev Monastery. According to it, Apostle Fadey’s disciple Eustathius preached Christianity in Armenia, and in this place he took death. In the IV century, a temple was built over his grave and named in his honor.

The snake and the raven

In ancient times the inhabitants of Syunik region considered the snake to be the patroness of the home and believed that happiness would leave the house of the one who would kill the snake. Once the monks drew water from the river and scooped up a poisonous snake. The crow that lived in these parts, seeing what was happening, rushed to the rescue and pecked the snake. Before the death of the serpent stung the bird, and she died. Grateful monks buried the bird next to their abode.

Once, two elderly masters returned to their native village – a builder of churches and schools and a clergyman who conducted water to the villages. They decided to build the last temple in their native village and bring water to it. Before the beginning of the work, two masters argued about who will finish the work sooner. At last, they entered into a contract – the one who will finish the work sooner will deserve an honest name and will be blessed by the people. A lot of time passed and the clergyman saw that the master had almost completed the construction. Not wanting to lose, he went to the trick and closed the area where the water had to flow with a white cloth. In the distance, the canvas, blown by the wind, was like a waterfall. At this time, the master was going to put the last stone, but turning around, he saw a waterfall in the distance. Unable to lose, he rushed from the cliff, and the stream was called “the brook of the priest”.