The Legend of Khor Virap 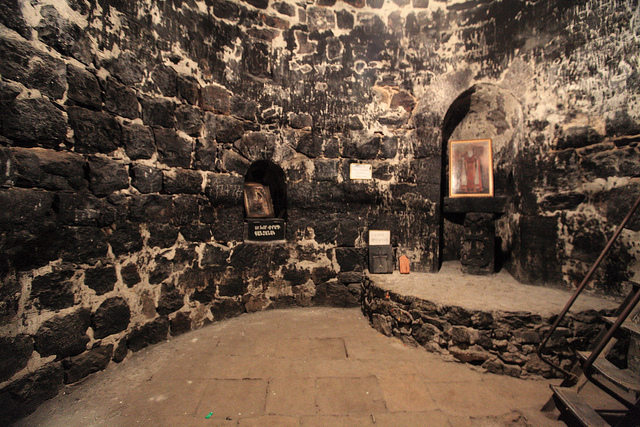 Legend has it, that where Khor Virap Monastery fortress stands today was once the ancient city of Artashat, which was the former capital of Armenia. On that hill, under the church, was a prison pit where people on death row would be kept. This place has great significance to Christianity in Armenia.

The king at the time was Trdat, a faithful servant to the pagan gods. And for this reason he confined Gregory the Illuminator, bound hand and foot, in the prison pit, for giving Christian sermons. The pit was strewn with snakes, scorpions and other poisonous insects, and it also stank of rotting flesh. It would have been much easier to die than for Gregory to struggle to live amongst these terrible creatures.

Fourteen years later, after King Trdat witnessed the massacre of the Christian Martyrs, the king was overcome by an abnormal illness. He stepped of his chariot in fury and began to chew at his body; he then turned into a pig.

Trdat’s sister saw an angel in her dream. She told the king’s courtiers that the king’s madness will not stop until they released Gregory. But they did not believe her. The dream came to her a fourth and fifth time, it was only then that they agreed to go to Artashat and lower a rope into the prison pit.

Once they lowered the rope they yelled “Gregory! If you are alive, come out! The God to whom you pray to has commanded us to free you!”

Gregory then grabbed the rope and they dragged him out into the light of day. The preacher’s skin looked as black as coal—he was then washed, dressed and taken to the king. Gregory knelt beside the king and began to pray with urgency, asking God to heal Trdat. Before long the king transformed back into a human again.

From that day Trdat became the most loyal and dedicated supporter of Christianity.

In 301AD, Armenia became the first country in the world to adopt Christianity as its official religion. This event happened at the exact place where the prison pit had been located and the Khor Virap monastery was built.