The Legend of Blessed virgin Hripsime 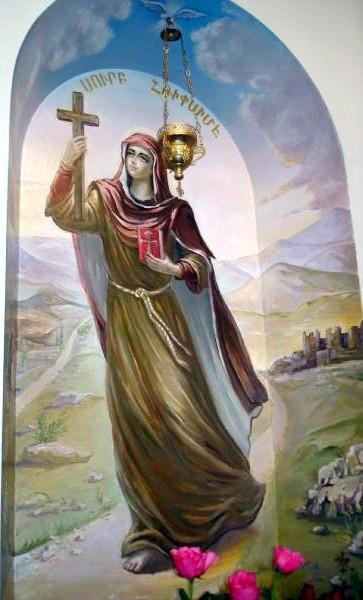 When the Roman emperor Diocletian, the worst persecutor of Christians, decided he would like to take a second wife, he sent artists out into the empire to paint portraits of the most beautiful women they could find.

It didn’t take long before news came back that they had in fact found such a stunning beauty in Rome — the young Christian nun’s name was Hripsime. She was more beautiful than any other woman in the world. As soon as the Diocletian saw her portrait he immediately called for a wedding to be planned.

However, Hripsime, who had devoted herself to Christ, fled Rome with 36 fellow nuns. They sailed to Alexandria, then onto Jerusalem. There in the Holy Land, Hripsime heard God’s calling and they all moved to Armenia, settling in the region of Ararat, in a town called Vagharshapat. Its gardens became their new home, it was where they spun yarn, made beads and enjoyed the surroundings.

But, stubborn headed Diocletian did not give up. He wrote a letter to King Trdat, the king of Armenia at the time, asking him to locate and kill all the nuns, except for beautiful Hripsime who wanted to be sent to him.

So, the garden’s where the nuns lived was surrounded by guards. Crowds converged on the shelter—noblemen and even the entire royal court, everyone wanted to see the young Roman woman. King Trdat sent his servants with a golden stretcher to extract Hripsime, but the girl resisted and they had to bring her out by force. Trdat, on seeing the Roman beauty, was overcome by lust and desire and tried to take her. God gave Ripsime great strength and courage and she fought off her attacker time after time. His unwelcome advancers were rejected and she tore off his crown and robes. She left him exhausted on the floor and bravely walked through the horrified crowd and returned to her house.

Not one to be beaten, Trdat sent executioners and guards the next time. Hripsime and 36 of her fellow nuns were killed for disobedience and their allegiance to Christianity.

It wasn’t long after this that Trdat fell ill and converted to Christianity. He repented for his sins. He wanted to keep the name of the stunningly beautiful maiden, who had never compromised her faith and sacrificed her life for it, alive for all eternity. So he ordered for a spectacular temple to be made in Hripsime’s name, the Temple of Hripsime. The temple was erected on the very site where the nun was killed.