The South Caucasus surprises with its colour, beautiful landscapes, ancient architecture, temperament, rich history, and traditions. Nations with a history dating back thousands of years have so much to tell and to show. Going through the pages of history and traditions, you may find some interesting customs, many of which have survived to this day. Keep reading and you will learn about interesting traditions of Armenians, Georgians and Azerbaijani.

Interesting customs and traditions of Armenians

The main value of the Armenian people is family and family ties and almost all the traditions and customs here are associated with the family. Let’s start with wedding traditions. A traditional Armenian wedding was celebrated seven days and nights with the whole village. The most important guest at the wedding is “Qavor” (godfather). According to custom, the groom with “azabbashi” (the unmarried friend of the groom) and several guests come to the bride's house with loud music and drumming. “Aghves” (messenger) is leading the convoy of cars notifying everyone about the wedding. In ancient times, aghves stole a chicken from the groom’s house and was the first to come to the bride’s house to inform about the arrival of guests. Women help the bride to get dressed in a closed room while the godmother sings beautiful songs while she puts on her veil.  One interesting and fun tradition is stealing the bride’s shoe. The one who manages to steal the shoe receives a reward from the godmother. After a view toasts around the table it’s time to take the bride out of the house. According to tradition, the bride’s brother blocks the way with a dagger in his hand. To pass the “obstacle”, Qavor has to pay. Finally, the entire column moves to the church for the wedding ceremony. Interesting traditions of the wedding ceremony are crowns for the bride and groom, and wine, as a symbol of the blood of Christ. After the wedding, the guests go to the groom's house, where the mother-in-law meets the newlyweds with lavash and honey. A fun tradition is a struggle between the mother-in-law and the father-in-law in front of the guests. The wife, of course, loses the fight, and as a sign of obedience kisses the husband. Finally, it is time for the wedding party. 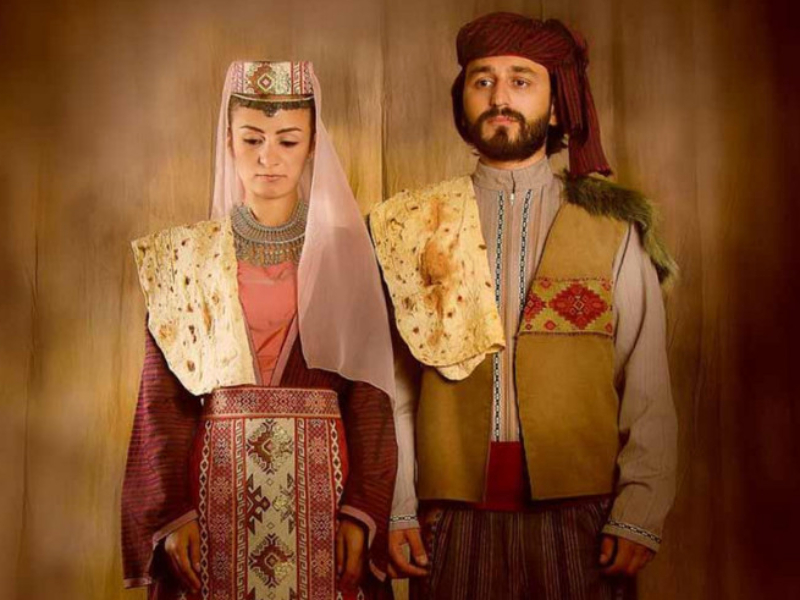 Wedding customs do not end with the wedding itself. For Armenians, the purity of the bride is one of her main qualities, and as proof of her innocence, in the morning they bring a red apple to the bride's house as a symbol of purity. In the old days, if the bride was not a virgin, marriage was declared invalid; often the girl became an outcast for everyone, including her parents and relatives.

The birth of a child is a logical continuation after creating a family. If the news about the unborn child is delayed for at least a couple of months, everyone will consider it a duty to ask the reason. Finally, a child is born. According to custom, a mother and newborn are not allowed to attend church for 40 days until the mother is cleansed of blood. After 40 days, parents with a child visit the church to receive a blessing. Another tradition associated with the child is “Atamhatik”, the celebration of the first tooth. The traditional dessert of the party is kchekhash - the cereal crops are strewed on the child’s head for happiness. Now, kchekhash is replaced by candy. 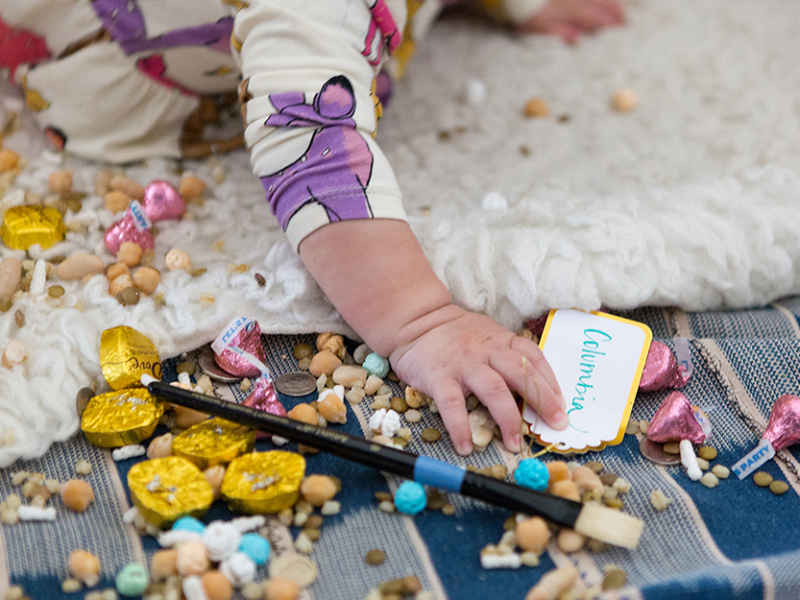 The last stage of the circle of life is death and burial. Memorial rites are held on the day of the funeral, on the 7th and 40th day of death, on the anniversary, and also after each church holiday. Traditionally khachkars are installed on graves.

One of the most interesting and bright holidays in Armenia is Vardavar. The holiday is celebrated on the seventh Sunday after Pentecost. However, even before the adoption of Christianity, Vardavar was celebrated as a day of praising the goddess of love and beauty Astghik. According to tradition, on this day, people visited temples for sacrifices and made a pilgrimage to holy springs. The main rite of the holiday was pouring water on themselves and others. The holiday was so beloved that after the adoption of Christianity it continued to be celebrated. Vardavar was changed into the Christian holiday of the Transfiguration of Christ. 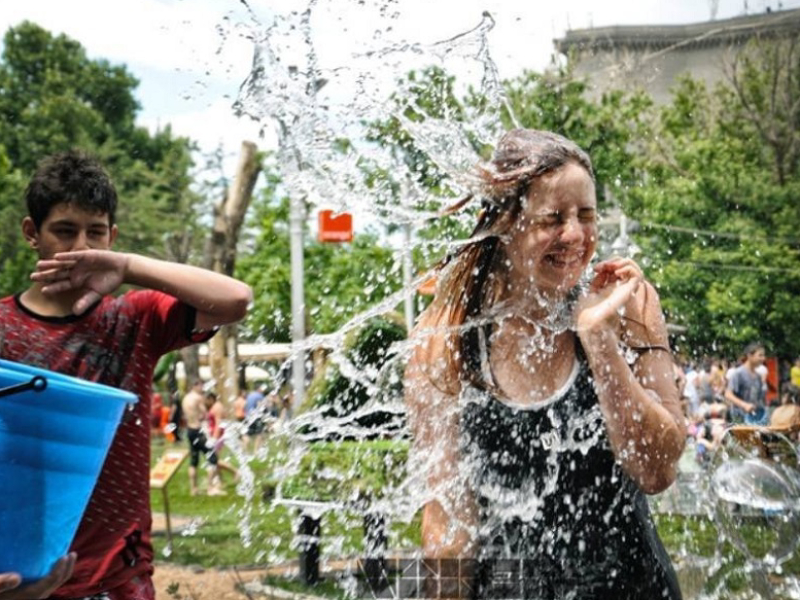 Each traditional dance has its history and customs. For example, only men of mature age had the right to participate in a national dance of Kochari. The basis of the movements of the dance is the image of the battle of the rams. This movement, warlike exclamations, and drumming convey the courage and strength of the participants.

Interesting customs and traditions of Georgians

Preserving ancient traditions is an essential part of the unity of the nation. That is why Georgians are trying to follow traditions and pass them on to new generations. 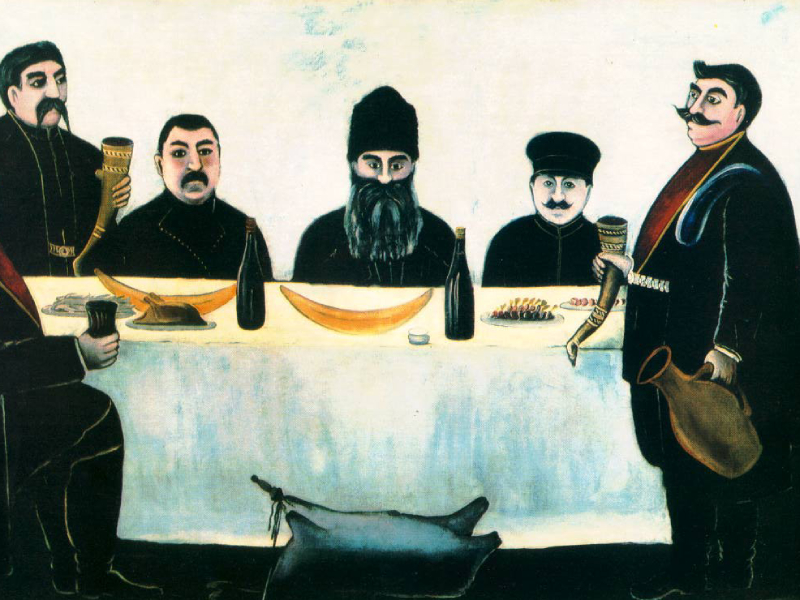 Georgians are distinguished by their hospitality, and the most interesting traditions are associated with this quality. In Georgia, even the simple dinner can easily turn into a real feast, and each table should have its own host. To be a good toastmaster, every Georgian needs to train the talent in “supra academy." In translation, supra means a tablecloth, but for Georgians, supra is more than just a tablecloth, it is a feast with friends. The meal begins with the choice of the host. The main function of the host is to say the right toasts at the right time. Toastmaster drinks the most, and with all this, he must give at least 12 toasts during the evening. Another important role of the feast is the merikipe, the person who spills wine. Besides pouring wine merikipe makes sure that all the guests feel well and are equally drunk. 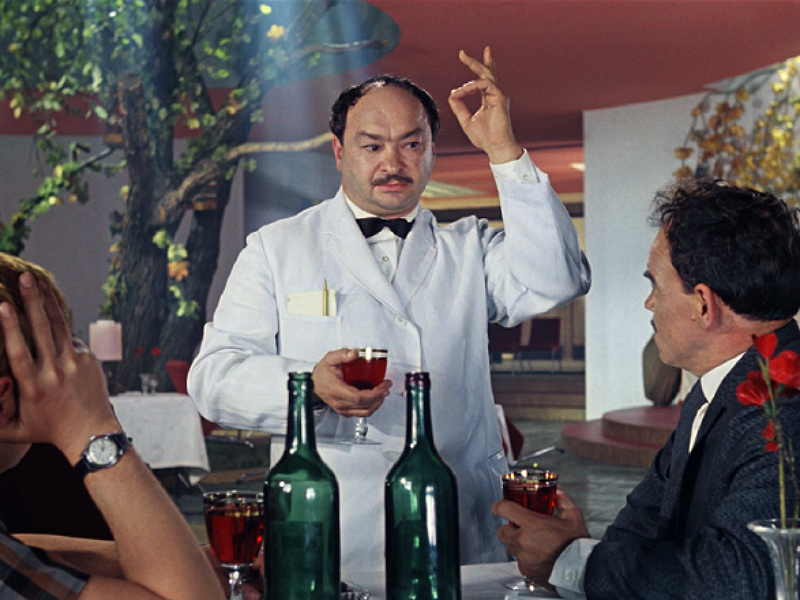 For Georgians, wine is not just an alcoholic drink, but a divine gift, so the wine cannot be drunk without a toast. In Georgia, a toast can be short, in about 80 words. The first toast to drink is for God, then for children, parents, and love. The role of guests at the table is very important. Women can participate and make toasts, but more often they decide to sit separately. Children, on the contrary, participate on equal terms with men, and can even make toasts. Another interesting tradition of the feast is drinking wine from the horn. If a man is offered to drink wine from the horn, he is not entitled to refuse and must drink to the bottom in one gulp. For the ceremony, exclusively white wine is used, approximately 2 litres. Despite such an amount of wine at the table, you can rarely see a drunken Georgian.

Another interesting tradition is “mekvle”, the first guest in the house on New Year's Eve. In the role of mekvle, hosts invite a successful and wealthy relative or friend who will bring good luck for the new year. In turn, mekvle should bring a bunch of grapes, wheat, pomegranate or a branch decorated with sweets and fruits. Mekvle enters the house with the words “I entered the house, I bring a blessing. My foot is an angel’s footprint”. 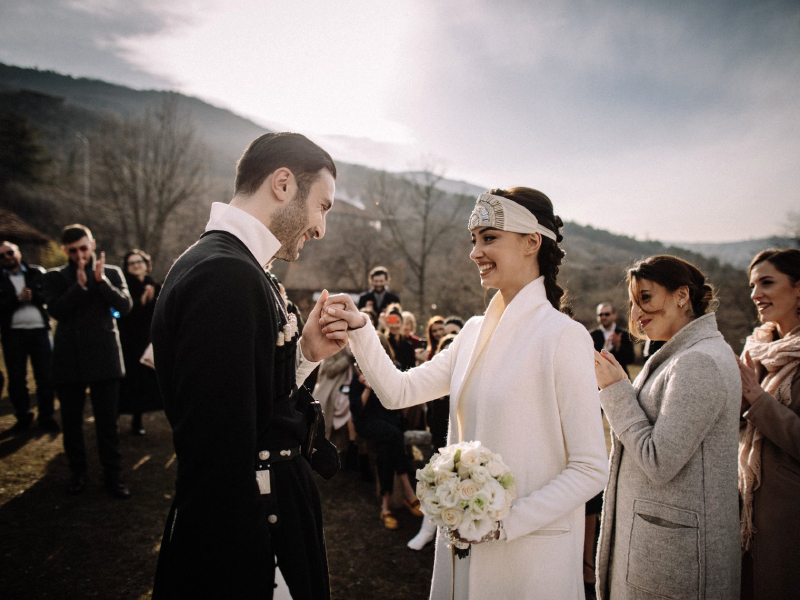 For Georgians, family ties are as well important. The wedding in Georgia begins with matchmaking “Makankloba”, followed by the engagement “Nishnoba” and the wedding of the “Kortsili”. The number of guests can reach up to a couple of hundred, and refusing an invitation is an offence for life. Before entering the house, the groom releases a dove. As a symbol of wealth and prosperity rice and raisins are poured onto the bride’s head. After that, the newlyweds are treated with a glass of wine, the groom drinks the first and puts the wedding ring in the glass, after which the bride drinks and passes it to the groom. In the end, the groom takes the ring and gives it to the bride with words of loyalty and love.

Amazing customs and traditions of Azerbaijanis

Muslim nations are known for their traditions and customs, and Azerbaijanis also adhere to religious traditions. In addition to religious ones, the country has many interesting folk customs that have been passed through generations for centuries. 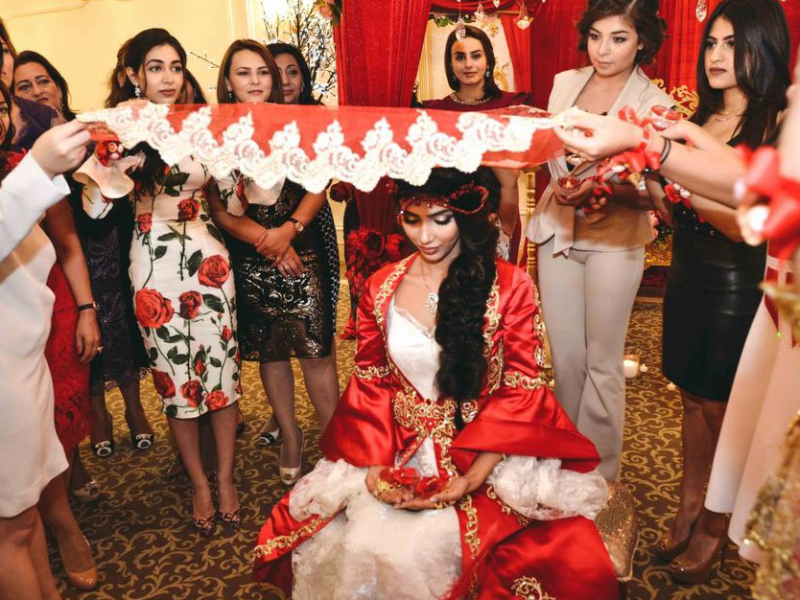 Many wedding traditions of Azerbaijanis have been preserved to this day. The wedding is always celebrated on a large scale, hundreds of guests are invited. Everything starts with the matchmaking. The mother of the groom visits the bride’s house to report their serious intentions. After that, the fathers of both sides meet and drink sweet tea with sugar. As a present, the bride receives a ring and a silk scarf. During the engagement, the bride is presented with gifts and a piece of sugar, which is broken when the first child is born. The day before the wedding, the bride and her friends gather in the house for “khna-yachti”. Girls and women present gifts, sing songs and draw traditional patterns on the bride’s hands. At this time, the groom and friends spend the traditional bathing ritual of "toi hamami." On the wedding day, young people circle a fire or a kerosene lamp, as a symbol of the hearth. The brother of the groom ties a red ribbon to the waist of the bride, as a sign of fertility and escorts from the house. A large mirror and lighted candles are carried ahead of the bride and groom as a symbol of cleanliness. At the end of the wedding, a plate of Uzerlik grass is burnt throughout the hall to protect the newlyweds and guests from the evil eye. 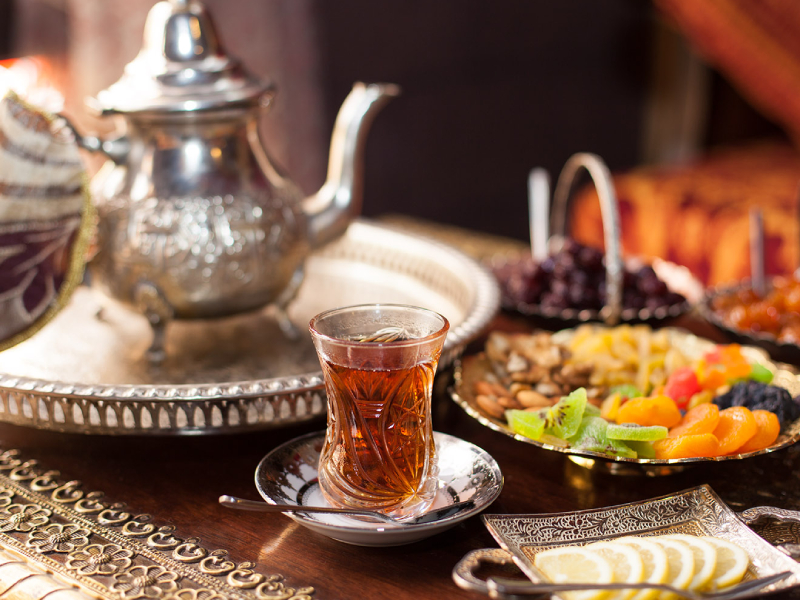 Azerbaijanis are also famous for their hospitality. In the villages, the custom of meeting guests is still preserved. For a special guest, the people gathered in the village and were divided into two groups. The elders with gifts, bread, salt, a mirror, sorbet, and sweets led the groups. All gifts were wrapped in red cloth. Guests were greeted in national clothes with songs and dances. Tea drinking is the main and most important ceremony. Tea is served before and after dinner with sweets, jam and sugar cubes, and refusing tea means deeply offending the owner. 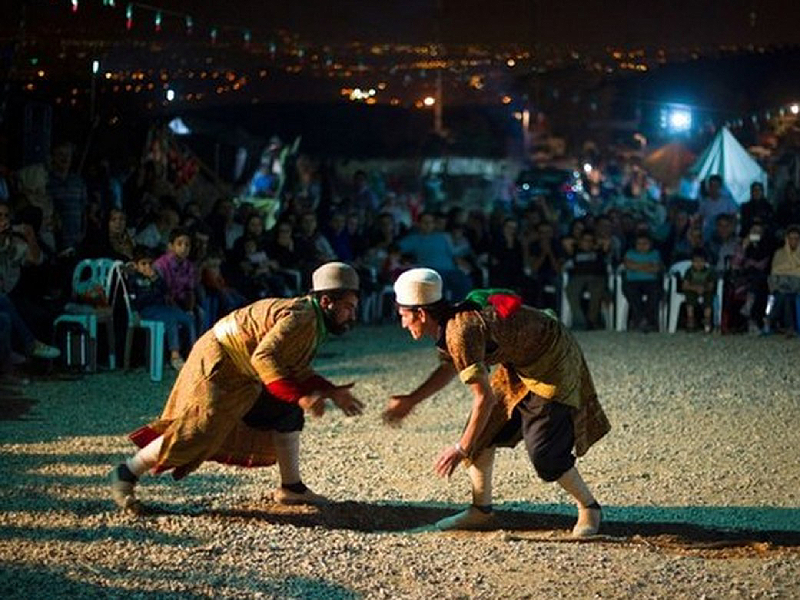 An interesting and exciting custom is a gülesh fight, in which participants show not only the strength of the body but also the spirit. Gülesh is accompanied by loud drumbeats and zurna. The match begins with the “maidan-gazmek” warm-up. The participants in wide trousers and bare-chested go to the centre and demonstrate characteristic movements. After the greeting, the gülesh begins. The winner is the one who puts the opponent on the shoulder blades.