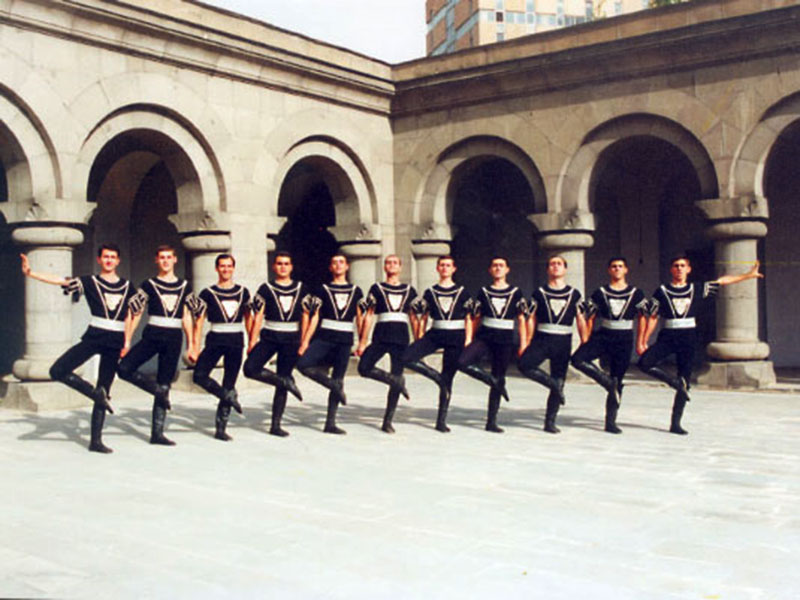 Probably many of you are already familiar with the history and detailed description of the Armenian national dances in our previous article. Today we want to tell you in more detail about one of them – the oldest and probably the most popular – kochari. After the millennium, it has not lost its value and, moreover, has become a national and cultural heritage of the Armenian people, who despite all the hardships of their fate continue to live, create and … dance.

The origin of the dance kochari dates back to many centuries ago. Initially, it was a war dance, the movements of which were based on the military and hunting experience and the dance itself was a special ritual conspiracy of the behavior in the upcoming battle. It also helped soldiers to dispose themselves for the battle. Throughout the history, kochari has become one of the most popular Armenian dances. In 1945, the Armenians danced kochari at the walls of  Reichstag in Berlin. At the time, UNESCO is considering the application to include kochari in the list of the intangible heritage. Let us recall that under the protection of UNESCO is already duduk music, the art of cross-stones, the epic “David of Sasun” and the national bread lavash.

As a national dance kochari is danced by holding hands and moving in a circle in a closed row. Generally, the main dancer announces about the figure change by a loud voice or by waving the handkerchief. The movements in the dance are springy, some of them appeared in the course of time when the cult of animals was widely spread, and exactly that’s why they remind the jumping of horned animals.

It is not so difficult to dance kochari. You don’t need to be an experienced dancer or have the ability to plastically move, you need to feel your partner and the whole team in general. And it is no accident that this dance is considered rural and is performed by those for whom the love to the homeland and close people is the most important.

Recently the National Ensemble of dance and song of Armenia “Karin” has launched an interesting project called «We and our dances». Each last Friday of the summer months in front of the Cascade in Gafeschyan art center park the ensemble holds an open lesson of Armenian national dances. It is free and everyone can come to learn national dances by watching and taking part. The director of the ensemble Gagik Ginosyan presents a historical overview of the dance, its meaning, and interprets traditional elements. The members of «Karin» in national costumes unite people and teach to dance. Of course, the great attention is paid to dance kochari, because it is one of the most popular and beloved. In cooler months, the event takes place in the cultural center “Narekatsi”.

If you want to take an individual lesson and learn the movements of kochari, then you can visit the dance schools of Yerevan, that are in abundance. Just contact us and we will help you to connect with the best dance schools.