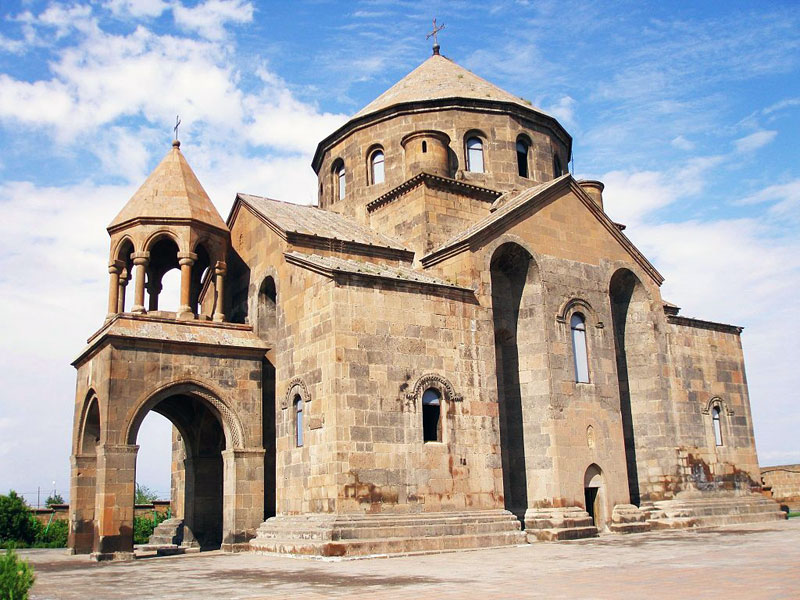 The VII century temple of Saint Hripsime is located at the entrance to Echmiadzin town and immediately attracts attention with its majesty.

The name of the church is connected with the history of St. Hripsime. Hripsime was one of the Christians who ran away from Rome to Armenia in 301 hoping to find shelter. Hripsime was so beautiful that the Roman emperor himself could not resist her beauty. After refusing the Emperor, Hripsime and her friends had to run away to Alexandria, where the Mother of God appeared to her and showed the way to Armenia. Unfortunately, the virgins did not find peace in Armenia as well, as King Trdat, hearing about the beauty of Hripsime, also wanted to take her as his wife. Being refused by Hripsime, the king ordered to kill all 37 Christians.

In the IV century on the site of the execution of Hripsime a chapel was built, and in the VII century, the Hripsime church was built instead of the chapel. The relics of St. Hripsime, who was later canonized, are kept in a crypt, under the altar of the church.

Throughout its history, the church has been repeatedly destroyed and rebuilt. Today the Church of St. Hripsime is in excellent condition, and, as a unique value, has been included in the UNESCO World Heritage List.