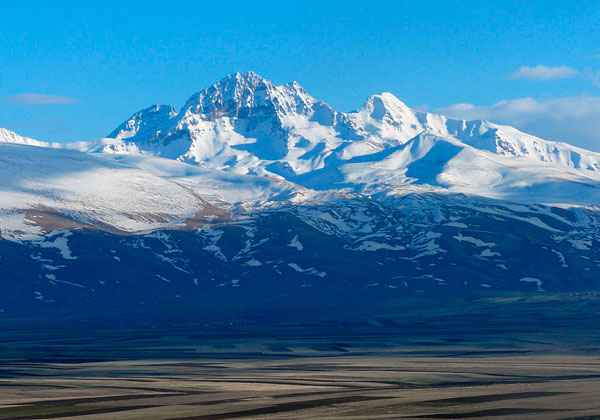 Mount Aragats, a quadriceps giant with snow-capped peaks, is the highest mountain in Armenia. The mountain range is located in the western part of Armenia, between the Ararat and Shirak plains. The top of Aragats is formed by four peaks, the most significant of which is the Northern peak with an altitude of 4090 m, then the second highest peak is the west - 3995 m, the eastern - 3908 m and the southern peak - 3879 m. From a distance, the four-headed Aragats resembles a huge flower with sprawling stone petals. According to popular belief, Aragats is an extinct volcano with a crater between the peaks.

Mountains play a special role in the history and culture of Armenians, which is why many legends and folk tales are associated with their names and origins. According to the most common legend, the name of Mount Aragats comes from the name of the Armenian pagan God Ara, which translates as “Ara's Throne”.

On the slopes of Aragats traces of prehistoric culture have been preserved: rock carvings, giant "dragon stones" near water reservoirs and sources, which symbolized the worship of water, as well as magnificent monuments of medieval architecture (Amberd Fortress, Byurakan). Aragats slopes are very fertile, during spring and summer they are covered with alpine meadows and pastures. Many endemic plants grow here. The animal world is also quite rich: jerboa, hare, fox, wolf, different species of lizards and snakes, representatives of birds inhabit the surrounding area. In spring hundreds of thawed springs feed the waters of Kasakh, Gegarot, Amberd and many other rivers. Mount Aragats is not only geographically significant for the country, but also has great tourist potential. The best time for climbing is from July to August, when the snow cover is completely melted and the mountain trails are dry and safe.