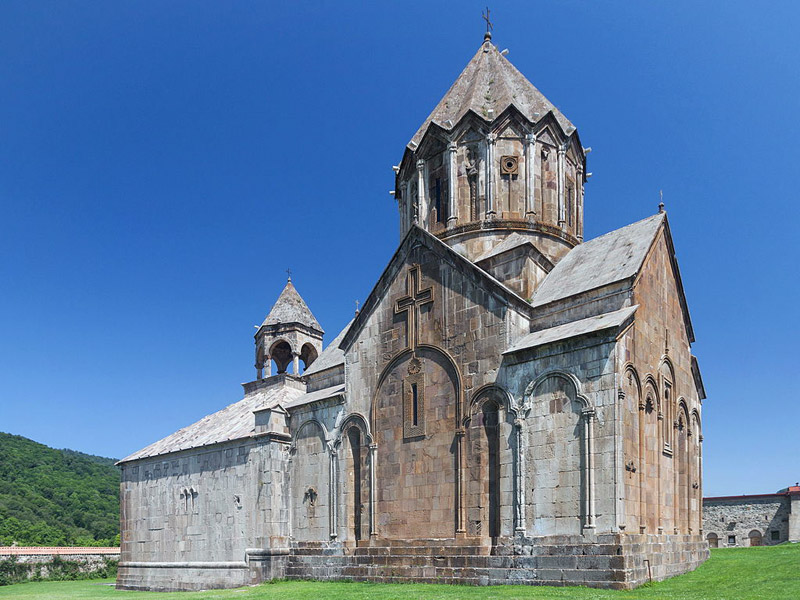 Gandzasar Monastery, headed by the Church of St. John the Baptist, is the most significant shrine of Nagorno-Karabakh. The monastery of Gandzasar, as well as hundreds of other ancient monasteries, testify to the thousand-year presence of Armenians in Karabakh and prove that the sacred Artsakh land from time immemorial has belonged to the Armenian people.

Gandzasar Monastery is perhaps the most prominent architectural monument of Artsakh, which for a long time has been a symbol of Armenian statehood in Nagorno-Karabakh. It is located near the village of Vank in the Martakert region, in the heart of the historical province of Khachen in Artsakh. The word “Gandzasar” is translated from Armenian as “treasure mountain” (“gandz” means treasure, and “sar” – mountain). Truly being a treasure, Gandzasar Monastery is “a pearl and encyclopedia of medieval Armenian architecture”.

The construction of Gandzasar began in 1216 under the patronage of the Armenian prince Khachensky. First mentioned in the tenth century, from the fourteenth century to the nineteenth century Gandzasar was the residence of bishops, and to this day the monastery is still the religious and cultural center of the country.

Locals believe in the legend according to which Gandzasar was founded on the site of the sanctuary with the skull of John the Baptist, which was brought to Artsakh by prince Asan-Jalal from Palestine. 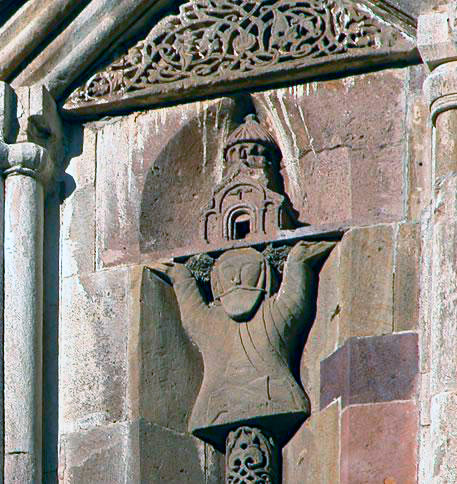 That is why in 1216 the central cathedral in honor of Hovhannes Mkrtich (St. John the Baptist) was built. The relics of the saint are buried under the altar of the church. The cathedral is masterly decorated with bas-reliefs with images of the Crucifixion, Adam and Eve and dozens of other stone figures, including sculptures of the kings of Khachen, holding a model of the cathedral over their heads, as if granting it to God. According to the inscription on the wall of the cathedral, the construction was completed in 1236. In total, up to 150 Armenian stone texts were found on the walls of the cathedral. The church of St. John the Baptist is also known for its unique 16-ray dome illustrated with biblical images. The monastery had a rich manuscript repository, a seminary, fortifications built in the 13th century, a dining room and a two-story school building.

Gandzasar was not only a spiritual but also a political center, as well as the place where the movement of the struggle for freedom and independence was originated. The monastery of Gandzasar played an important role in the battles for freedom. As early as the 17th and 18th centuries, Gandzasar’s Catholicos supported Karabakh meliks (princes) in their struggle for liberation. At the beginning of the 18th century, the leaders of the liberation movement of Artsakh and Syunik were centered around the Catholicos of Yesai Khasan-Jalalyan, the descendant of the great Asan-Jalal. In the church gavit, together with the Catholicos, Israel Ori wrote his famous letter to the Russian Emperor Peter I, in which they expressed their desire to join Russia. At that time, there were 300 active churches in Artsakh. At present, the Holy See of Gandzasar is the residence of the Archbishop of Artsakh.

Gandzasar greatly suffered during the Azerbaijani aggression against Nagorno-Karabakh in 1991-1992. Periodic air attacks on the monastery aimed at destroying this masterpiece of Armenian architecture by powerful bombardment which continued throughout 1992. Symbolically, it was during the fighting in the vicinity of the Gandzasar Monastery that the first large regiments of the Azerbaijani army were surrounded and destroyed by self-defense units of Nagorno-Karabakh. They say that God’s will prevented the explosion of the shells and bombs. They could destroy only the monastery walls. During the war, the Azeris did everything to destroy the church, but they did not succeed. In the church wall there is an unexploded shell, which is still kept there. According to the legend, when the Azerbaijani army bombed the monastery, the priest remained in the church, praying on his knees. At that moment angels appeared on both sides of the holy table. The angels said that the monastery was protected by God’s will and that there was no reason to be afraid. Witnesses say the angels’ tracks are still visible on both sides of the holy table.

You can get acquainted with this impressive architectural monument by choosing one of our tours to Nagorno-Karabakh.