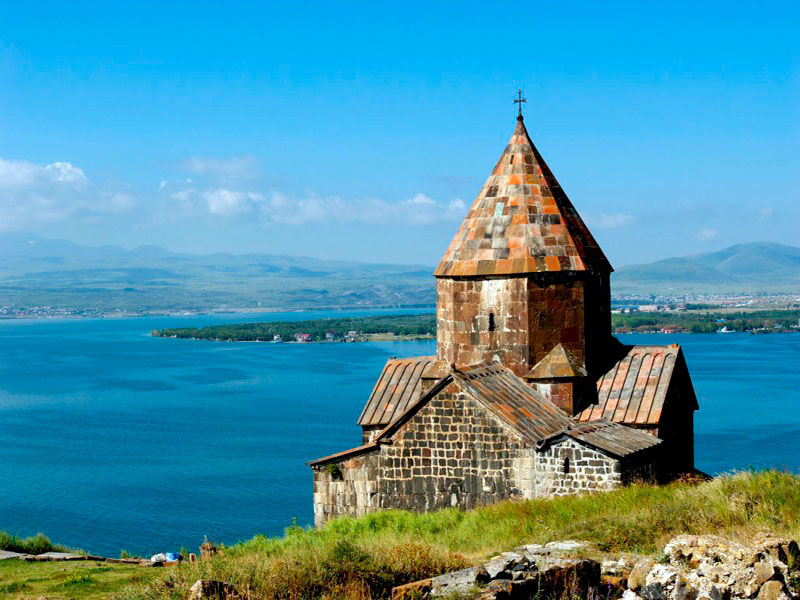 Sevanavank Monastery located on the Sevan peninsula is one of the most famous historical and cultural monuments in Armenia.

The location of the monastery is truly fascinating: being built at the hilltop it offers magnificent panoramic views of the azure Sevan - the pearl of Armenia. The Sevan Peninsula, which once used to be an island, is known as a settlement since the Bronze Age. In the pagan era, according to some researchers, there were eight pagan temples on the island, one of which served as a place of sacrifice and rituals. According to tradition, St. Gregory the Illuminator together with King Trdat arrived at the Sevan island in 305 to spread Christianity. At their request, the pagan temples were destroyed and the Temple of the Resurrection of Christ was erected in its place, next to which was the chapel of St. Karapet. Gregory the Illuminator erected a wooden cross, performed the anointment ceremony and baptized people. He left the priests who came with him from Caesarea on the island to establish the spiritual life of Sevanavank.

Little information is known about Sevanavank until the 9th century. It is only known that the revival of the spiritual life of the monastery is closely associated with the activities of Archbishop Mashtots Eghvardtetsi, who later became the Catholicos. In 874, he founded the brotherhood of the Holy Apostles and built the churches of St. Karapet and the Holy Apostles under the patronage of Mariam, the daughter of King Ashot II. According to historian Stepanos Orbelyan, Mashtots once had a dream in which he was told to build a church named after the 12 apostles and to establish spiritual unity. This story is preserved on a manuscript that has survived from the depths of the centuries. This fact also indicates that the first Armenian Matenadaran was in Sevanavank monastery as being one of the safest places, precious manuscripts were collected and stored here by monks. Obviously, the Sevan Matenadaran is the oldest in Armenia - it existed from the 5th to the 20th century - about 1500 years. A monastery with such a precious arsenal of manuscripts could not have had a school or training center. In the 15th century, Daniel Vardapet founded Sevan Monastery, where the monks studied holy scriptures, philosophy, literature, and so on.

The churches of St. Karapet, St. Apostles and St. Mother of God existed until the 1930s. In the Soviet period, the Church of St. Mother of God was demolished and later restored by local residents. Today, the churches of St. Karapet and the Holy Apostles are active and attract thousands of believers from all over the world. On the territory of the monastery, numerous khachkars have been preserved, which are the pride of the entire Armenian people. The most unique one is Amenaprkich or the All-Savior khachkar. The complexity of the carving and ornate patterns of khachkars evidence the skill of Armenian monks.