The monastery of Khor Virap embodies the unquenchable longing of the entire Armenian people about their historical homeland and the biblical Mount Ararat.

As if by a twist of fate, this ancient sanctuary is located on the border between Armenia and Turkey, about 44 km from the capital city of Yerevan, gazing directly right at the sacred mountain.

Khor Virap on the background of biblical Ararat has long become a symbol of Armenia and the most famous landmark ever depicted on various postcards and pictures. It is from here that the most gorgeous and picturesque views of the snow-white Ararat, green fields and mountains on the horizon open. The history of the monastery is closely connected with the adoption and spread of Christianity in Armenia as a state religion. Thousands of faithful come each year on the pilgrimage to this holy place. The monastery of Khor Virap is famous not only for its architecture but also for its deep dungeon, which has a fascinating history. According to the legend, the Armenian King Trdat III, faithful to pagan gods, during the persecution of Christians doomed Gregory the Illuminator to imprisonment in a deep dungeon for 14 years for his Christian preaching and convictions. One day King Trdat fell seriously ill with swine fever, and no one was able to cure him. According to the historian Agatangehos, the king was slowly turning into a pig and devouring himself. Trdat’s sister once had a dream in which an angel came and told her that only Gregory the Illuminator, imprisoned in Khor Virap, could cure the king. Finally St. Gregory was freed and healed the king with his prayers. From then on Trdat III believed in miracle and in 301 proclaimed Armenia the first Christian state. 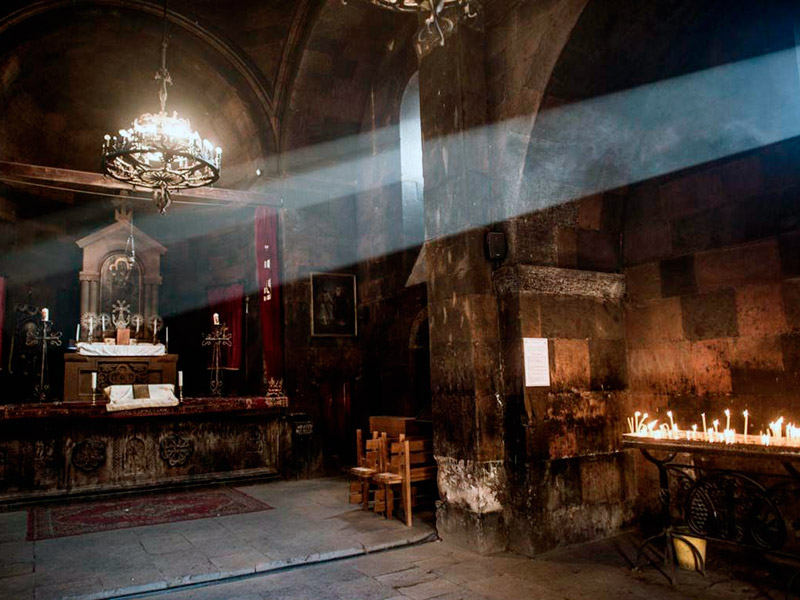 Subsequently, in the V century at the site of the prison pit was erected a chapel, which has survived to this day. Since the XIII century Khor Virap, being a national sanctuary, had also become a pan-Armenian center of education and science for the time. In the XVII century, Archimandrite David Virapetsi restored monastery buildings and revived the monastic life. In 1666-1669, the fortified walls of the monastery and the adjacent buildings were erected, and a new church named after St. Gregory was built in place of the old chapel above the pit. Today, the prison dungeon of the holy martyr is open to visitors. It is located inside the church of St. Gregory, on the right side of the altar. The depth of the pit is about 6.5 m, and the diameter is 4.5 m. The specially adjusted steep staircase leads down into the pit, and any believer can go down and see with his own eyes the dungeon in which the martyr spent so many years. In the central part of the monastery, inside the fortress walls, there is also the Church of the Holy Virgin, built in the XVII century. The monastery of Khor Virap is one of the favorite sanctuaries of the Armenian people: solemn divine services, weddings and baptism ceremonies are often held in the church of St. Astvatsatsin.

The distance from Yerevan to Khor Virap monastery is about 44 kilometers. Travel time by car is approximately 1 hour. You can reach Khor Virap Monastery by a travel group or on your own. You can also take a taxi (it will cost 4500 AMD, about $9), rent a car, or take a minibus, which departs from the platform of the railway station near Sasuntsi Davit metro station. You will need to get off at the turn of the monastery. Then, take a taxi or catch a ride. The distance between the turn and Khor Virap is 4 km.