Each country has its own wedding traditions, but, probably, none of them can be compared with Armenian ones for their colorfulness and beauty. It would be a great omission on our part not to tell you about unique old and new Armenian wedding traditions and why not maybe some of you will decide to spend this important life event on our land by our traditions. 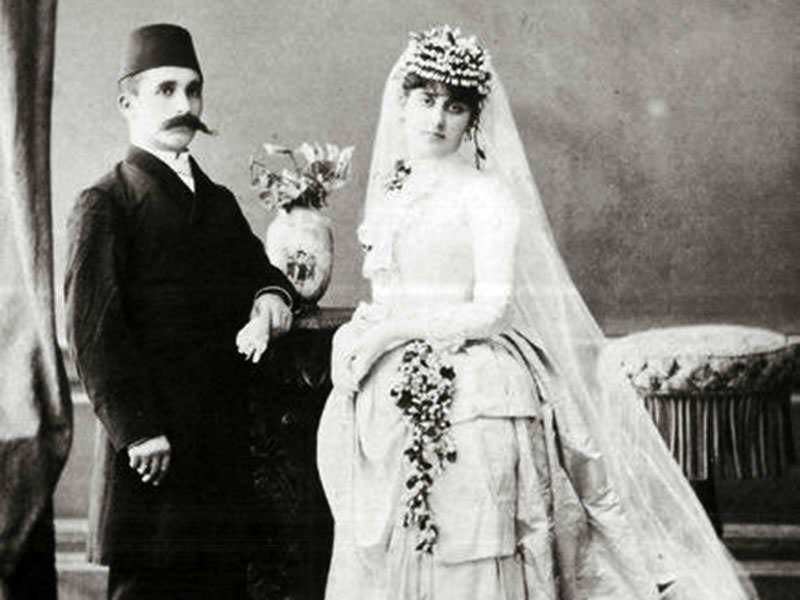 From time immemorial, Armenians have faithfully honored and observed many rituals connected with the wedding ceremony, some of which have already disappeared and some can be met these days.

In ancient times, Armenians tried to marry off their children as early as possible, and what’s more, only parents had the right to choose a bride for their son while the initiative belonged to the mother. After making the choice, it was the beginning of the most important part of the ritual – the matchmaking which was traditionally held only by men. Matchmakers visited the girl’s house and metaphorically alluded to the purpose of their visit, saying, for example: “We came to your house to rip out one flower”. However, it was not common to accept the proposal at once, that’s why the matchmakers had to come again and again unless they got a positive answer. The next step is called in Armenian “nshandrek” and is translated as “a betrothal”. 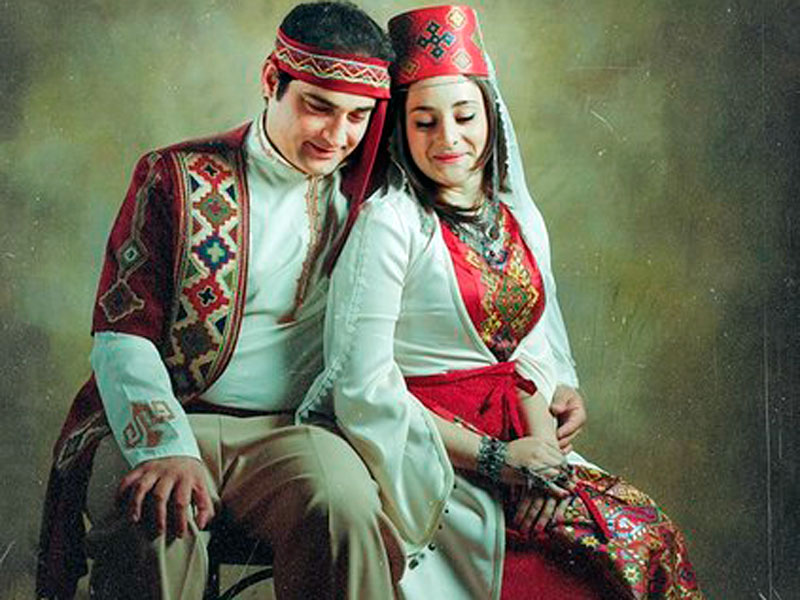 That day a special festive table was laid at the bride’s house and the groom’s side was to bring an engagement gift – “nshan” (more often a ring). The bride was allowed to appear at the celebration only an hour after the arrival of the groom. And after warm greetings and toasts, the bride and groom had to leave, as by tradition they could not stay any longer.

The next stage was the assignment of the wedding date and the discussion of the dowry. The families as well had to choose the most respectful family from the background of the bride and groom to be witnesses or in Armenian “kavors” at the wedding. For the ceremony, the groom prepared at kavors’ place, where they organized a stag party with the ritual bathing of the groom.  He was seated with his back to azabbashi (the main friend at the wedding), and then poured with water. The purpose of the ceremony was to show the separation of the groom from his unmarried friends.

The wedding itself begins in the morning in two houses at the same time. The couple first went to the church, and then a festive feast began, accompanied by toasts, songs and dances. No wedding celebration was complete without an interesting ritual called “kanch” during which the guests gave the couple monetary gifts, decorations, and sometimes even a cow or a calf. 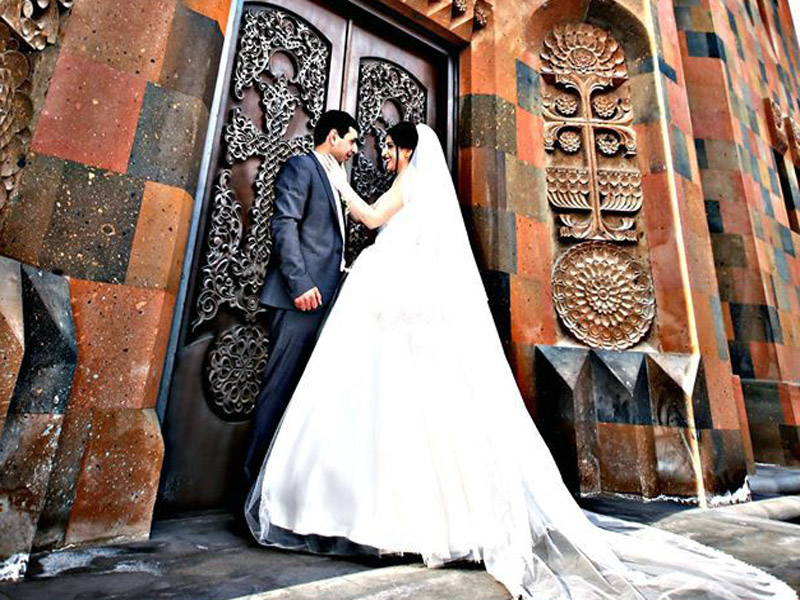 In modern days, Armenian wedding traditions have undergone a number of changes, although much remains the same. Now, fortunately, the young people choose their mates without the help of their parents, so the matchmaking ceremony is only a formality. Nowadays, Armenians prefer European wedding traditions which they tend to combine with some old Armenian ones. The feast now lasts no more than 1-2 days, however, it is no less beautiful, colorful and hospitable. The girls here tend to choose modern classic white dresses and more rarely national wedding costumes while the boys prefer classic suits.

On the wedding day, the bride’s side lays a beautifully decorated table, dresses up the bride and then all await the arrival of the bridegroom, who must take the girl out of hеr father’s house. The groom’s side arrives on luxury wedding cars, and in the yard, they turn on traditional festive music and start dancing expressing their happiness. The bride leaves her father’s house and the wedding procession continues its way to the church which is considered one of the most important parts of the ceremony. Armenians are the Christian nation and the blessing of the priest is an important moment. Recently, Armenians prefer to get married in picturesque suburban areas in ancient cozy churches. The surrounding beauties add unforgettable impressions to this wonderful day. For example, the popular places are Echmiadzin, Geghard, the churches of Gayane and Hripsime and many others.

After the church, the wedding procession accompanied by the sounds of loud and cheerful signals alerting about such a wonderful event goes either to the groom’s house or to the banquet hall for celebration.  At the entrance to the hall, a couple traditionally is meet by the groom’s mother, who throws on the shoulders of young Armenian lavash and offers them honey as a guarantee that their life together would be sweet.

Further, all will have a festive meal with delicious national dishes, dances, and songs. Young receive expensive gifts, money, and the bride traditionally throws her bouquet. It is also common here to distribute “tarosiki” – beautifully decorated wedding candies that are given to unmarried friends of the bride and groom as the changeover.

And in 2008, in Nagorno-Karabakh, one of the largest weddings in the world was organized, in which 700 newlyweds took part.

Weddings in Armenia: Halls and restaurants Armenians are very sensitive to the choice of the restaurant to celebrate the wedding because it is the lightest and the most important holiday in the life of a young couple. Armenia, in particular, its capital, Yerevan, offers a wide range of restaurants and halls for celebrations, all of which differ in the interior, menu, and location, that sometimes you can just get lost in the selection. If you are interested in Armenian colorful wedding customs and traditions, and you have decided to plunge into a whole new world and carry out this important life event in Armenia, then we hope our guide will help you in choosing the most suitable location for celebrating weddings.

One of the favorite places for a wedding celebration is, of course, the restaurant “Florensia” situated in Yerevan on Barbyussi Street. It offers a large luxury decorated hall, excellent menu and high service. 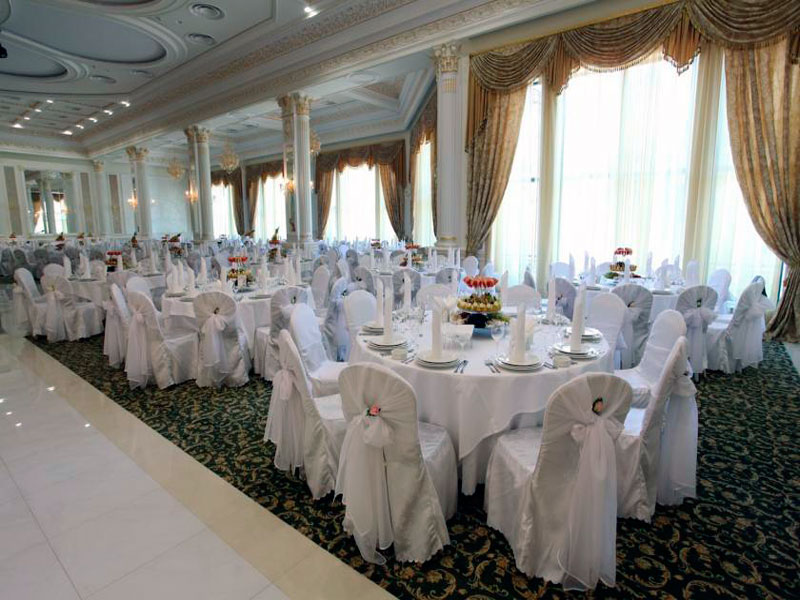 The other popular place is the restaurant “Ojakh” the name of which is translated from Armenian as «a family». It is situated not far from Yerevan in the town of Abovyan and also pleases its guest with all the necessary conditions for a wonderful pastime. Good reviews also have a restaurant “Vivaldi”, “Pharaoh”, “Caucasus”, “Rena”.

Recently spending a wedding in Armenia has become very popular among tourists and that not a coincidence: it is exotic, unforgettable and not expensive. So if you got interested in Armenian wedding traditions and want to spend this important event here in an absolutely new atmosphere and get pleasant memories, AraraTour company is ready to organize everything for you. We will take into account all your wishes, just contact us.