Traditional Drinks of the South Caucasus

Alcoholic and refreshing drinks are an integral part of any traditional South Caucasian table. The people in this region love long feasts, strong drinks, and sweet toasts. Keep reading and you will learn lots of interesting facts about the most popular traditional drinks in Armenia, Georgia and Azerbaijan. The degustation of Armenian cognac is one of the top must-do things while traveling in Armenia. Before tasting, learn some historical facts about this unique alcoholic beverage.

The history of winemaking in Armenia may have started from the time of Noah when the ark landed on Mount Ararat, and Noah with his sons planted a vine in the Ararat Valley. Alternatively, we can prove the theory of the first winemakers by archaeological excavations. One of the oldest, or maybe even the very first winery, which is supposed to be 6000 years old, was found in one of the caves on the territory of Armenia.

The Armenian strong aromatic beverage was first mentioned in 66 AD when King Trdat and his winemaker went to King Nero with a new drink. According to Greek historians, the emperor liked the drink so much that he endowed the winemaker with countless gold.

The modern history of cognac begins in 1887 when the famous merchant Nerses Tairyan opened the first wine and brandy factory over the Yerevan fortress. After 10 years, the factory was sold to Nikolay Shustov, thanks to which Armenian cognac was presented on the international market.

The secret of the bright, rich aroma of Armenian cognac lies not only in the unique distillation and aging technology exclusively in oak barrels, but also in the Ararat Valley grape varieties and spring water (meanwhile distilled water is used in the production of French cognac).

To take a walk about the cellars with oak barrels, feel the aroma of vanilla, chocolate, and cognac you may visit the Yerevan Ararat Brandy Factory, which also offers a degustation of the best species of Armenian brandy. Armenia is often called the cradle of winemaking, and even though the country is known for its cognac on the international market, the importance and history of winemaking never lost its value. As already said, the history of winemaking in Armenia, both on its historical and modern territory, began from time immemorial. Even in the Neolithic era, civilizations already cultivated grapes and wheat were engaged in the production of beer and berry drinks. One of the first references to Armenian wine was found in the works of the Greek historian Herodotus, who described how Armenian merchants brought wine vessels through the rivers Tigris and Euphrates to Babylon.

The wine was an integral part of both pagan and Christian Armenia. The vine adorned the facades of temples, palaces, churches, and cross-stones. So, in 1894, a mosaic floor with Armenian inscriptions and images of birds in the wine passages was discovered in Jerusalem. The mosaic floor of the VI century adorned the chapel of St. Polyacios at the Damascus Gate. We can talk for hours about historical facts and legends, but the truth is that wine and winemaking are part of the history of Armenia.

The history of modern production is also associated with the name of Nerses Tairyan and the opening of the first factory.

Today, in the village of Areni, not far from the caves where clay jugs and a winery were discovered, a wine festival is held annually during the harvest. Well-known producers and new ones take part in the fest to present their wine. Vodka occupies an important place on the traditional Armenian table. It is not a simple vodka, but homemade fruit vodka. Armenian vodka is not as famous in the world as wine and brandy but it is worth a try.

The most popular fruit vodka is made of mulberry. The strength of the beverage can reach up to 75%. The characteristic aroma and degree of vodka is a true test of endurance. Not everyone is ready for such a challenge and maybe only the inhabitants of the region, where, according to tradition, mulberry vodka is made. In the city of Goris, Syunik region, the Mulberry Festival is held annually, where locals present their homemade vodka and mulberry jam. Just imagine what fun is to take part in that fest.

The technology of distillation includes a medium-sized copper cube, which gives vodka a special aroma. The same technology is used to produce other types of fruit vodka.

In addition to the concentration, mulberry vodka is known for its useful qualities. For digestive disorders and prevention of cardiovascular diseases, mulberry vodka is drunk early in the morning on an empty stomach (30g). By the way, despite the variety of alcoholic drinks, Armenians are not considered drinkers, in the Armenian language, there is no word for “hangover”. A few words about refreshing soft drinks. In addition to carbonated drinks and homemade fruit punches, there is always a decanter with a carbonated or noncarbonated tan on a traditional table. This is a fermented milk product like kefir. It is made from matsouni, mixed with water and salt. Tan goes well with fatty meat dishes, helping them quickly digest. Winemaking in Georgia has the same rich history and legends as winemaking in Armenia. Alazani Valley, the land of winemaking is one of the most beautiful regions of the country. More than 500 grape varieties are grown here, from Georgians learned to produce a unique wine. Georgian land and wine are inseparable; almost all folk traditions of hospitality are associated with wine, serving wine and toasts.

Some historical facts about winemaking in Georgia. According to archaeological excavations, inhabitants began to engage in winemaking in the territory of modern Georgia 8,000 years ago. The technology of storage and ageing of wine has not changed. In small factories and home wineries, wine is still stored in Qvevri vessels. The same vessels were found during excavations. By the way, qvevri is included in the list of the intangible cultural heritage of UNESCO.

The traditional technology of wine production involves the use of not only grape berries, but also twigs and seeds. The resulting mass is poured into qvevri for fermentation. After the transfusion, the residue is used for chacha. The wine produced by this technology is more aromatic and vibrant.

Since the XIX century, Georgian wine stopped being exclusively homemade. In Kakheti, factories began to open one by one, and Georgia started exporting wine. Today, wine export is one of the most important components of the country's economy. Chacha is a Georgian homemade brandy made from grapes. The traditions of production are as old as winemaking, and to this day the Georgians make chacha using a special technology.

The Georgians got the knowledge of producing alcohol from fruits from the Greeks, who in turn learned from the Arabs. And yet, the Georgians added some details into production. Georgians started using the waste left after wine fermentation instead of fresh fruit. Now you can also try chacha made from tangerines, oranges, figs, and persimmons.

For chacha, a sweet Rkatsiteli grape variety is used, water and sugar are added and left to ferment for two weeks. After that, the product is distilled into homemade brandy. A real chacha has about 60 degrees.

Chacha is served at room temperature in small glasses before dinner as an aperitif. You cannot drink it with carbonated drinks; it will not only ruin the whole taste, but it can also harm. Chacha is stored exclusively in glass bottles in a cool place. Thanks to the pleasant fruity aroma, chacha is very easy to drink, but you’d better not to experiment. Coca-Cola and Pepsi all over the world, while in Georgia it is lemonade. And despite the giants of the market, traditional lemonade remains the main refreshing soft drink in Georgia. The most popular of them are Natakhtari, Kazbegi, Zedazeni, and Lagidze, at one-time lemonade was delivered to the Russian emperor. Today, Georgian soft drinks are presented in the world market.

The secret of the taste of Georgian lemonade is pure spring water and natural fruit syrups. The history of lemonade production began in the XIX century when the pharmacist Mitrofan Lagidze produced a soft drink and called it “Lagidze Water”. Subsequently, new brands appeared, but the quality of lemonade stayed on the top.

The most popular types of lemonade are lemon, pear and tarragon lemonade. By the way, tarragon is often used in Armenian cuisine.

The vast majority of Azerbaijan is Muslim, drinking alcohol is prohibited by religion, and therefore, there are no traditional alcoholic beverages in Azerbaijan. Of course, this does not mean that the country has no alcohol at all. Moreover, despite the religious ban, many regions are known as the most drinking areas. It is not advisable to buy local vodka; the low price of the product is due to poor quality. That is why the residents of Azerbaijan, because of the low quality of alcohol, put themselves at a high risk of poisoning. Azerbaijan is ranked the second in the “alcohol rating” among the South Caucasian countries. 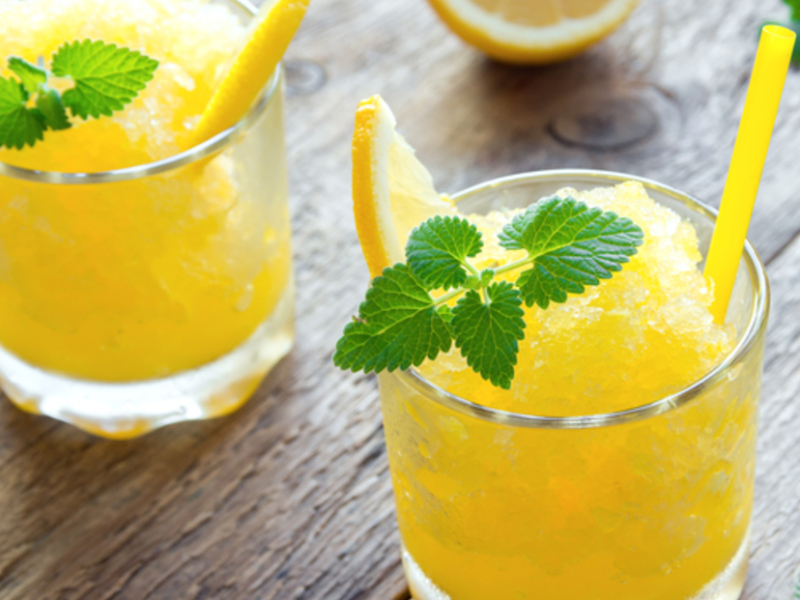 Another variant of the drink is milk sorbet. Instead of fruits and berries, boiled milk is added to boiled sweet water.