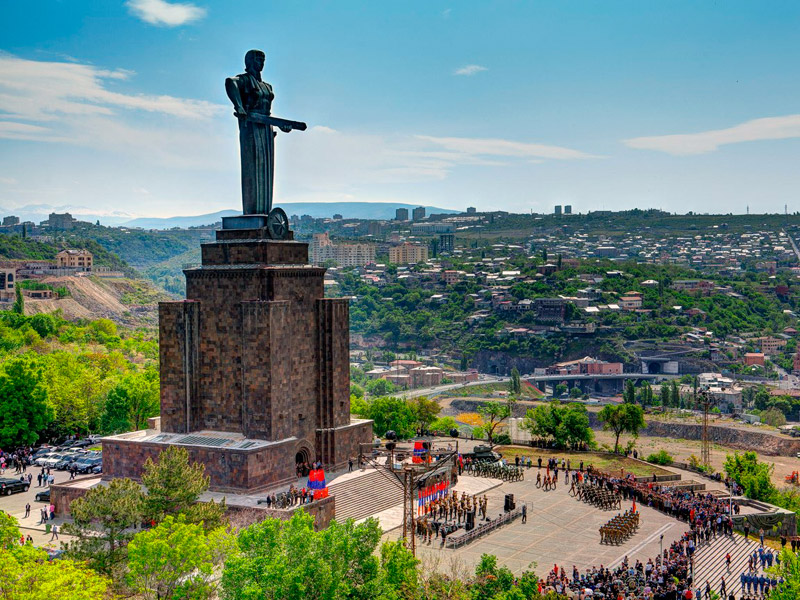 Mother Armenia military museum is located in Victory Park under the monument of Mother Armenia, which stands high on a hill. From here one of the best panoramas of Yerevan opens.

The monument was opened in 1967 on the site of the statue of Stalin. The 22-meter figure of Mother Armenia became one of the main symbols of Yerevan: a symbol of the courage of the people. In 1970 a military museum “Armenia in the Great Patriotic War of 1941-1945” was opened under the museum.

Today the museum is called the Military Museum of the RA Defense Ministry “Mother Armenia”. The museum resembles a church from the inside and has two floors, the floors are divided into themes. On the first floor, there are exhibits on the topic of Armenia’s role in the First World War. The second floor is dedicated to the Artsakh Liberation War. The museum presents documents, photographs and other evidence of the activities of Armenian marshals and generals. The walls of the Memory Hall is decorated with photos of the heroes of the World War, in the Book of Memory, the names of the dead and those who were lost in battle are immortalized. The second floor is devoted to the Artsakh Liberation War. The names and photographs of the National Heroes of Armenia and Artsakh, as well as the liberation operation of Shushi, are presented. On the third floor of the museum there is a ceremony hall. Here are regularly held events.

The museum features more than 30,000 exhibits. There are military exhibits of the First World War near the statue, the Eternal Flame burns on the opposite side of the monument. Every year a double celebration is organized in Victory Park – Victory Day and Shushi Liberation Day. The museum is open every day except Monday.