The Legend of Holy Spear Monastery 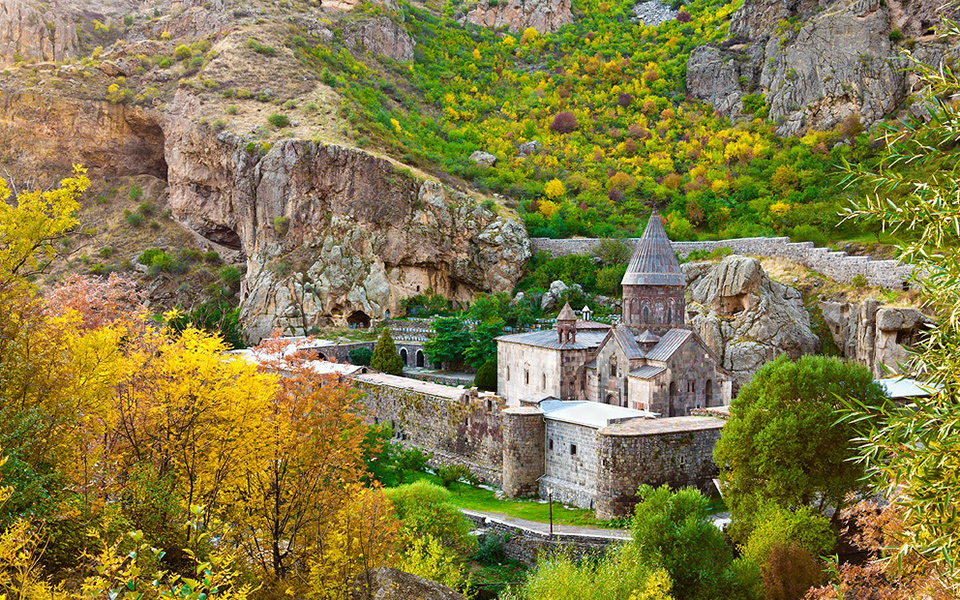 There was once a brother and sister who decided they wanted to build a God-pleasing church so that they may be immortalized in the world forever. The siblings traveled to Armenia and went to the beautiful Garni valley — with its amazing views and surrounding mountains. They decided to build their temple right there.

They went from site to site, trying to find a suitable place to build their temple, but every place they went it was as if a voice was telling them “No, that’s not it.”, until one day, in frustration, the sister raised her hands to the heavens and asked God to help them find the right place to build.

The next morning, when the siblings opened their eyes, the sun was just rising over the mountain peaks—they saw a beam of light coming from the top of a great cliff. The siblings climbed up the cliff and the brother took a sharp pick and heavy hammer and started chiseling into the surface of the cliff, chipping away more and more each day, deeper and deeper. His sister lowered her long braids with a basket attached, and the brother would fill the basket with pieces of rocks, which she would raise and empty. After many days and nights of continuous work, they had hollowed out an entire temple in the solid rock face.

Finally, they rested and looked at the masterpiece they had created — it was perfection. Decorated with beautiful ornaments, carvings, and columns and topped with a stunning dome, the church was a pure work of the spirit.

The siblings resided in the temple for the rest of their lives. Before they left this world the Apostles Thaddeus and Bartholomew arrived at the temple with the spear of the Roman legionary Longinus, which had been used to pierce the body of Jesus Christ on the cross. The spear has since protected Geghard Monastery from storms, eruptions, human deceit and enemy invasions.