The Best Recipes of the Armenian Cuisine

Probably, many of you have already tried some of the national Armenian dishes. Maybe you liked them so much that decided to prepare yourself for your relatives and friends? In this case we have some good news: we decided to ease your task and collect all the best traditional recipes in this article:

The best recipes of the Armenian cuisine: Spas

The famous Armenian white soup spas is one of the most popular and loved in the country. And how to prepare it at home? Here is one of the options: 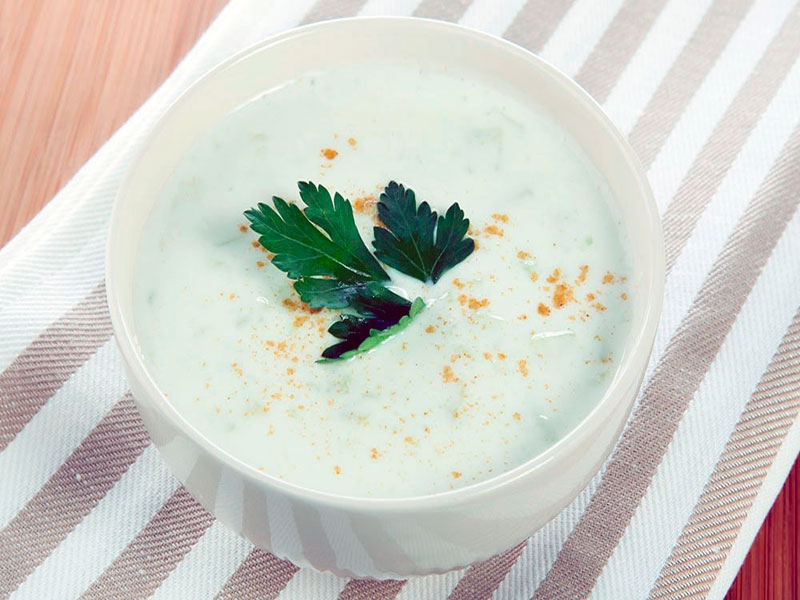 To start with, boil wheat until cooked. If you do not have wheat, you can use rice although in this case the taste of the dish will change a little. Take a bowl, and mix an egg with some flour in it, then add diluted with water matsun (1:1) to the egg mixture.  Put the bowl on a slow fire and stirring constantly, bring to a boil. Chop finely the onions and then fry in butter or vegetable oil. In the last step, add the fried onions, boiled wheat and finely chopped greens (you can take some mint, cilantro and parsley, some prefer basil) to the soup and cook for another ten minutes. That’s all – low-calorie, healthy and delicious soup is ready. You can eat it hot or cold.

The best recipes of the Armenian cuisine: Khash

Khash is another famous soup of the Armenian cuisine. The season of the dish begins with the onset of cold weather. Khash is not only delicious but also very useful: it is usually prescribed to people after fractures and sprains and is also known for its so-called effect of sobering. And here is the recipe: First you need to prepare beef legs – singe, scrape, and rinse them thoroughly. Then cut the legs lengthwise and soak in cold water for one day (do not forget to change the water every 2 hours). After the necessary time is over, place the beef legs in a pan and cover with cold water so that the water level is higher than the product of 15 cm. Simmer without the addition of salt for 7-8 hours. In the meantime, you can prepare the scar. Clean and rinse it, then place in a saucepan with cold water and cook until tender. To do this, let the water boil, then boil for 15 minutes, rinse and drain the scar, then refill the saucepan with clean water and cook until the characteristic odor disappears. When the scar is ready, cut it into small pieces and add to the soup being prepared. For half an hour until khash is ready add the bay leaf and peppercorn to the broth. Khash is considered ready when the meat separates easily from the bones. When the soup is ready, remove the meat, separate it from the bones, chop and add to the broth. Then you need to prepare a garlic dressing. To do this, cut the garlic and rub it with salt. Place the garlic on the dish bottom, pour the hot khash over and then add the greens. With khash Armenians often serve radish salad and eat it only with pita bread – this thin bread is torned into small pieces and added to the broth.

The best recipes of the Armenian cuisine: Tolma in grape leaves

Is it possible to imagine an Armenian table without meat, and especially without tolma? Of course, no! In winter, Armenians prepare tolma in grape leaves and serve it with white garlic sauce, and in summer, they prepare summer tolma where meat is stuffed in seasonal vegetables. Indeed, the real Armenian tolma is so delicious! And here is a step by step recipe for making tolma in grape leaves: 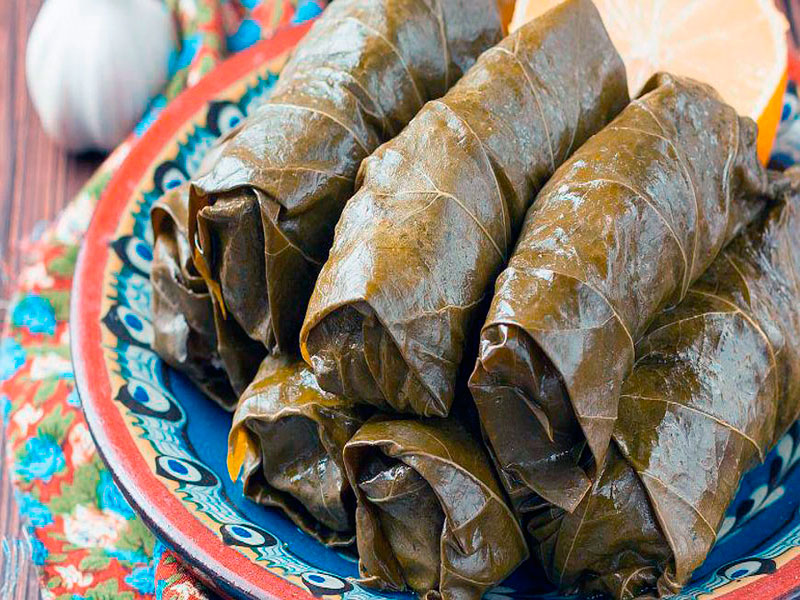 So, first you need to add salt, pepper, chopped onion, and parsley to the bowl with minced meat. Next, mix it well with hands – in this case, the meat will thoroughly saturate all the ingredients. Add a little water and mix again. Well, that’s all the stuffing is ready. Now it’s time to form the “rolls” with grape leaves. Fresh leaves are not widely available in shops, but you can buy pickled leaves in most of the supermarkets. Carefully lay out a bit of stuffing on a grape leaf (about a teaspoon), and then tighten the “envelope” like you do with pancakes. When you are over with all leaves, put the “rolls” in a deep saucepan in dense rows. Fill it with cold water and close the top with a wide plate. Cook over medium heat for an hour. For a white sauce, Armenians add chopped garlic to matsun (fermented milk product). You can use sour cream instead.

The best recipes of the Armenian cuisine:Khorovats 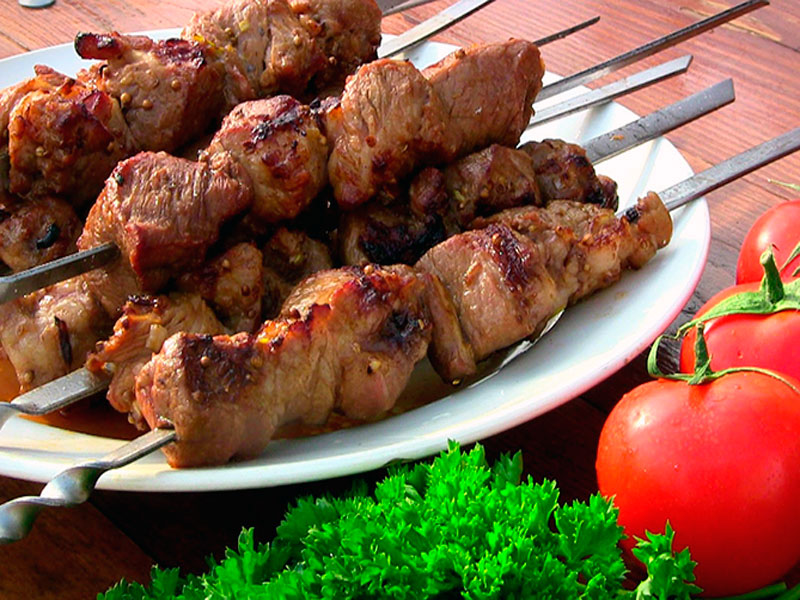 Armenians prepare barbecue by their national recipe and call it “khorovats”. Armenian khorovats is worthy of all praise, and the preparation of this delicious meat dishes is a real ritual for the Armenians. There are lots of preparation variants in the country, but we decided to share one of the most traditional and popular one:

First you should buy good meat the day before the khorovats preparation. For traditional Armenian khorovats, the best choice would be a pork loin, ribs and tenderloin. Most of all the locals love meat on the bone, it is believed here that such kind of meat is the tastiest. After buying the meat, it is necessary to cut it into pieces and marinate. One of the characteristic features of Armenian khorovats is that meat is cut into large chunks. The loin should be cut along into medium pieces with the thickness of 2-3 cm. The meat of the tenderloin is the tenderest and lean so it should not be cut into small pieces. Otherwise, barbecue of tenderloin will be very dry. Ribs can be cut by one or by two ribs, which depend on the thickness of the piece of meat. When all the pieces are ready, it’s time to start marinating. For that, you will need white onions, black pepper and dried basil. Meat should not be salted. Pepper the meat on all sides and sprinkle with dried basil, rubbing and crushing it in hands. Then cut the onion into thin half-rings. You will never spoil this dish with onions – the more you add the more delicious barbecue will be. Take a broad deep bowl and place the bottom with the first layer of the onion. Then lay the second layer with some pieces of meat. The next layer – the onion again. And so to the end. Put the bowl into the refrigerator for one day. After the necessary time is over it’s time to pass to the next stage – the skewering and roasting the meat. We recommend getting the meat out of the refrigerator in advance so that it acquires room temperature. After you have skewered the meat it is time to salt it using coarse salt. Well, that’s all, now you can proceed directly to roasting of the Armenian khorovats! By the way, this dish is traditionally prepared only on natural charcoal. Once the coals are covered with white ash, you can begin to roast the meat. Based on the ancient Armenian traditions, the more you’ll turn the skewers, the tastier khorovats will be. Khorovats is served on the traditional Armenian bread lavash with onion. Well, that’s all – bon appetit!

The best recipes of the Armenian cuisine: Khorovats of vegetables

Armenians traditionally serve khorovats with roasted over charcoal vegetables. They are served either whole or as a delicious salad. Those interested can also prepare this dish at home, and roats vegetables on the gas. The result is no less delicious. So, in order to prepare a salad of khorovats vegetables, you will need: Roast the vegetables over the fire until they turn black and tender. Do not forget to turn them. Peel the vegetables from the black rind, then cut into small pieces. Add to the vegetables finely chopped onion, parsley, salt, pepper and season with vegetable oil. That’s all!